...between NGR and ALG at the National Stadium, Abuja. It was my first time at the imposing and seemingly well-maintained structure which was reasonably clean. The place where many a heart of a man gets broken...by the poor or lacklustre performance of his team.

Anyway, here I was, once again, in the midst of an orderly group of people. I would estimate that about a 100 turned up to watch. The game kicked off at 4pm AFRICAN time (which was actually few minutes past 5!).

I found it interesting that during the National Anthem, the players signtalked it rather than put their hands over their heart like statues as is customary in all international and national sports competitions over the world.

I won't go 'commentary' on the match which saw NGR win and of course, hopefully on its way to Athens '13 except that I noted a gifted player who had another condition apart from deafness.  During half-time, the cheerful mime group entertained us. The entire ALG delegates were very gracious.

I will put up the videos and pictures shortly. Please accept my apology for not putting them up at the time particular posts are submitted.

The photos and videos... Uhmmm, viewing would involve some sort of neck exercise and stretching... 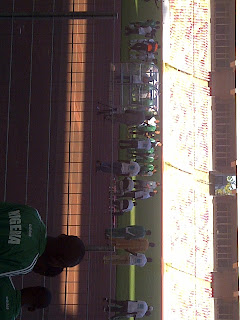