Another 'holiday' in this country kicks off today until Monday. I have lost count of the number of short breaks/long weekends that most people have had since I have been around for a few months. Do work actually get done here? I am sure that some more 'short breaks' are due before we say goodbye to 2011.

I am trying to figure out the African version of short weekend breaks. Loads of beautiful places to go on the African continent for 3-4days.My radar is on Angola and gorgeous beaches
Mozambique and great seafood
Tanzania and Mount Kilimanjaro & Zanzibar

Namibia and quad-biking in Kalahari Desert,etc
You get my drift...plenty of beautiful places and great things to do! And of course, honor invitations from my wonderful friends in Mauritius, Uganda, Sudan, South Sudan, Malawi,etc... I love and love and love travelling... But sometimes flying isn't part of that 'love affair'. I remember flying from Brussels to Nuremberg in a lightweight jet. I sat next to an 8 year-old American army brat who asked me if it was my first time flying. All because he noticed that I was silently reciting a psalm before take-off. *amused chuckle*

So that brings me to the point of road trips! I have done several road trips but the real ones that I'd love to do: in the USA-the Atlantic Coast Road trip (or the Appalachian trail or Route 66); in Africa- across Southern Africa from Botswana through Namibia to South Africa to Mozambique; across West Africa- from Nigeria to Benin Rep. to Togo to Ghana to Burkina Faso to Mali to Senegal and end with a chilling out session at Serrakunda in the Gambia. Problem is  1) short weekend breaks cannot accomodate such road trips ; 2) I still haven't made up my mind on which US road trips to do 3) I have not yet gotten a suitable travel buddy / mate /companion for these road trips (Vacancy is still open; applications are welcome- with an 'honest' photograph and an affidavit stating that you are not a wussy/fussy/angry person/murderer).

Closer home, I am yet to visit Kainji Lake and its game reserve; Obudu Cattle Ranch and a very lovely place (sorry, I can't reveal it just yet....). I was telling a friend just yesterday that I was amused at the way that a lot of people fly out to Europe, US and Dubai just to shop during their holidays. I don't quite relish shopping as a hobby; I find it stressful and therefore I keep that sort of activity to the barest minimum during my holidays (thank God for online shopping!!). Camping is fun; bush trips are fun. Not all the time though. There are still  some safe places to do that in this country. If anyone has some suggestions on where to visit especially in the South West, kindly drop a comment.

......that took place two days ago. I got to the venue about 3 minutes past the scheduled time and what did I see? Practically everyone was already there and ready to go! Impressive, I must say because Africans in general are known to be late for everything. Hence what is called the 'African time'. Anyway, it was easy for me to know who was part of the rally because of the bright yellow (bright green for executive members) t-shirts a lot of people were wearing. The message emblazoned on the t-shirt was 'Deaf people can do anything except hear'. Simple and straight to the point.

Here's one interesting 'individual' t-shirt: the wearer/owner very kindly permitted me to take a photo 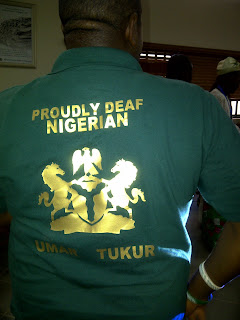 The national news channel which was supposed to cover the event did not turn up. What does one expect? The government is doing NADA for the deaf whom they are supposed to support. So there is absolutely no positive image laundering for the national news channel reporter and cameraman to do. Duh! And another major news channel was invited and maybe because no money was exchanged, these people did not turn up either! Duh! Duh!! A couple of small independent news channel were around but they were only present for the press conference.  I had a good friend and colleague who fortunately was on annual leave but was kind enough to lend his support.

The press conference was quite brief and somewhat organised. I was able to look around (from my seat) and take stock. Almost everyone was in good spirits (a good sign of the solid solidarity amongst the people). Although I had some curious looks (partly because I wore hearing-aids on both ears and didn't do a lot of signtalk), people were very friendly. I could count on my one hand the number of people who wore a hearing-aid. I did a couple of interviews and learnt a LOT! And next was the rally, I.just.did.not.bargain.for.the.shining.hot.sun.blazing.in.all.its.glory! Wheew!! Another impressive thing was the quick cooperation of everyone to fall into organised groups. Hearing World, take note!  The trek started off well with the Road Safety officials helping to manage traffic; a lot of people handed out pamphlets to both pedestrians and vehicle occupants. Although I had some interesting conversations with a couple of people, I took the advantage to know my surroundings better. I find it easier to know a particular neighborhood on foot rather than driving around. My people-watching antenna was of course attuned. It was a trek indeed and if I could get there at 5.30am in the morning in the near future, I would re-do the trek. We finally ended up at the National Assembly (with a little 'help' of a lift on the way). I must admit that my primary reason of joining the rally was to get into the NA .....  Well unfortunately, the exco members never received any response from the office of the senate president regarding the rally. Security reasons; whatever?!!!! As we were stretching out, relaxing and refueling ourselves with some snacks after the long trek, who did we see passing by us in all his 'glory'? The senate president. And he scores no cookie point for failing to stop or even to slow down when he saw the group. Come on, a group wearing bright yellow t-shirts and  hanging out right outside the NA gates and you don't get bitten by the curiosity bug? I see.... I am going to 'comment my reserve' now....

Today went well; someone graciously gave me the opportunity to interview him. People ARE interesting!

In two days time, the country would be marking its independence anniversary. One is supposed to get excited about turning another year, right? But with so many unrealised dreams in young people today especially the deaf, this is a real cause of sadness and frustration. But holding on hope against ALL hope is another thing....

Email ThisBlogThis!Share to TwitterShare to FacebookShare to Pinterest
Labels: signtalk

It's been over 5 years since I last blogged and now I have been bitten again.....hopefully with a permanent 'complication'; seeing that I left my old blog still breathing somewhere in cyberspace. And perish the thought of asking me to divulge its whereabouts!!

Now back to the 'business' at hand, some friends suggested-nay commanded that I put my thoughts on whatever it is that is going on/goes on/went on/will go on my mind here....the nosey lots! So many things, so little time and so much space. So many more minds to rub with here. Oooh I feel excited already! Posting here as frequently as I used to write in my paper-and-pen diary whilst as a child wouldn't be very easy but I'll surely try my best *said in my best clipped voice*.
I have just returned from an interesting program held for the International Week of the Deaf. Learnt a lot. Met a lot of people. I am pleased to say that my attention was suitably held and that I did not attempt to snatch a snooze for even one second... The thing is when you go for a gathering with hearing people- read people who can hear and talk-,  you get all sorts of speech ranging from the chirpy, animated chatter to the stammering splutter to the boring drone. Apply these sounds to the hearing-aids of a deaf person who habitually lipreads and doesn't have a fantastic attention span and you'll get one not-so-pleased person....
Now back to what happened earlier on today, I was impressed. As ALL and I mean ALL the signtalks- (talks by a deaf who signs) were brief; none of these long-winded speeches. I am always for the KIS maxim : Keep It Simple! The signtalks keep me awake; just take a blink of the eye and you may miss the gist. There were sign language intepreters (SLI) on hand to help those who did not understand American Sign Language which is the lingua franca here. I know BSL (British Sign Language) more than I do know ASL. Since ASL is used here, I will be learning and using it more often ( and adding it to the basket of languages that I know already; cool ehn?!).
The highlights of the ceremony were the presentations by the nursery students of a special school for the deaf and the Silent Afromime Troupe. The mimes were all done by profoundly deaf artistes. For those who are hearing or hard-of-hearing, you'd be impressed with how their bodies move in sync with the beatings of the drum. Out in the hearing world, if your dance step is off, you have no rhythm or whatnot. But who cares in the DeafWorld, you enjoy what you see and enjoy the vibrations. The mime started with a heavily-pregnant woman who was ready to pop. The next scene showed the formerly pregnant lady who is now a new mother, carrying her newborn and a jubilant husband/father. His mood soon changed to frustration indicating that nobody in his family line was deaf and that his child cannot or should not be deaf. He urged his crying wife to send the child away (to where? Who knows?) He later changes his mind and charged his wife to send the child to school. The end of that mime was met with exuberant waves-synonym to the noisy claps of the hearing world.
Now. The nursery school students presentations stirred a lot of interest. Why? When I was at about their age, I was forced, admonished, encouraged, compelled to do the oralism ie oral talk not signtalk (even though my classmates and I would do sneaky signtalks every now and then). But here, these students signtalk totally as their only means of communication. I am not going into the merits and demerits of that right now. What is important to note is that they are already communicating! Not among themselves but learning. In countless cases in Nigeria, unfortunately many deaf children don't even go to school until they are about 10! And that is usually the time they start to communicate ie signtalk. It is commonly known that a hearing child picks her/his (speech) language skills from interacting with the immediate environment from a very early age. A child hears sounds and can make sense of what s/he hears; not so the deaf child. A child is not born with (knowledge of) signtalk and so has to be taught. The theme for this year's International Week of the Deaf is ' Deaf Children: Their Right to Education in Sign Language'.

This is a 10.28min video clip taken during the conference. The lady in the pink outfit is the principal of the special school whose nursery students made the presentation. Apologies for making you view the video at such an abnormal angle.

I'll get back to what happened yesterday at the rally in my next post later...
And thanks for reading!